The Carinthian Lakes surrounded by mountains look so romantic. Just like all of Southern Austria. Many anglers make stops here on their way to Italy; maybe because of the beautiful nature or the favourite spin fishing. However, most of them think that the lakes are cold and full of trout; lakes that do not provide carp with as good conditions for growing compared with the lakes in Italy or France. 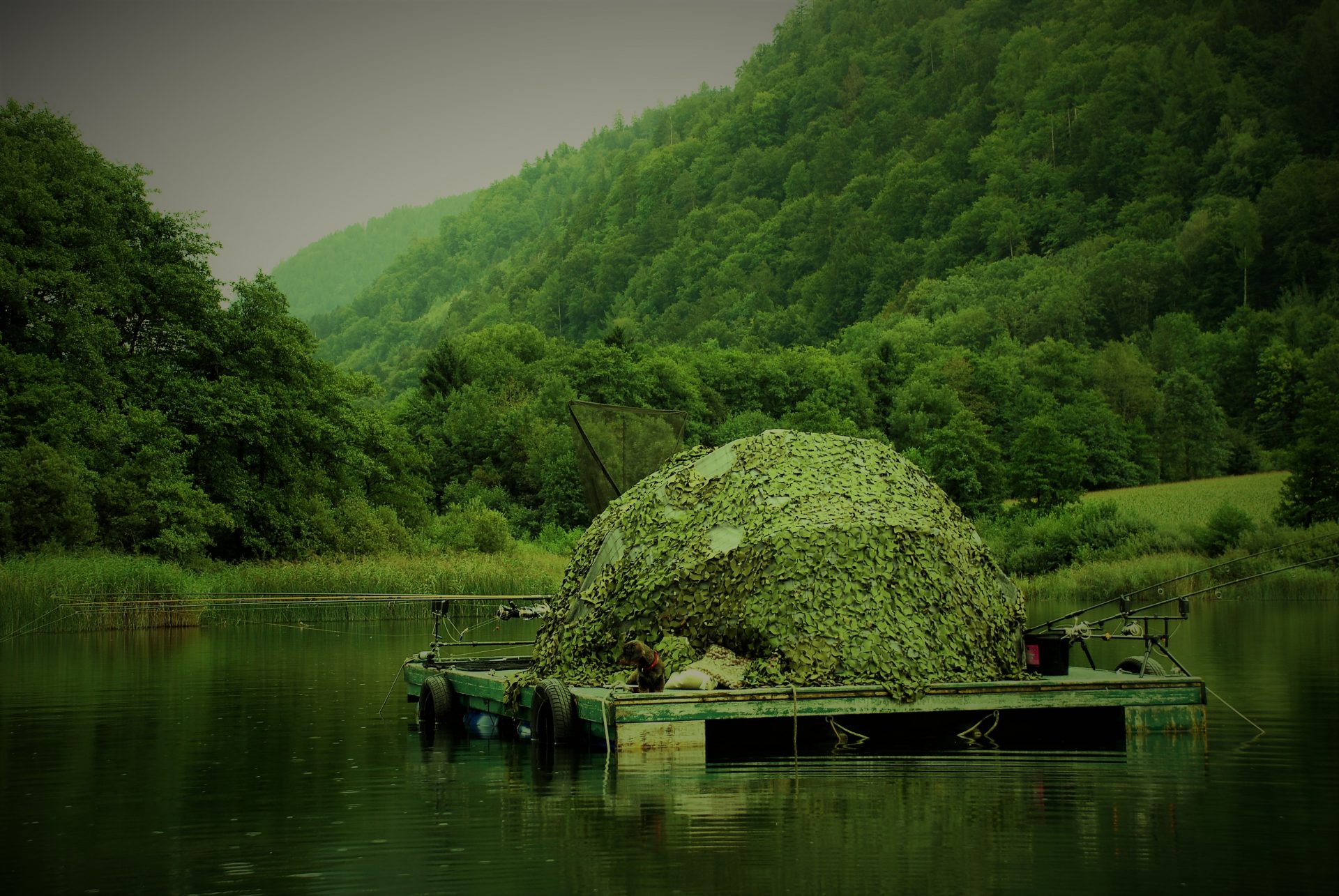 To be honest, I also thought that. But when I imagined blue and green crystal clear lake with sailboats and mountains visible in steam clouds, sunset, mountains and lake covered in pink reflection, I was convinced I want to give it a try. The first impulse that I received was from my Austrian friend Martin Hatzl; he sent me photographs of Ossiacher See lake and basic information about it. And in cooperation with the district superintendent Markus Weber, he arranged fishing from a pontoon for me. That was something I had always wanted to try: rocking safely on the waves, being close to the fish, being immediately mobile and most importantly, having maximum privacy. The only thing I had to manage was to explain to my girlfriend that we would spend our vacation on an area of approx. 4×3 meters. That wasn’t so difficult, because I am very good at that.

It was the end of August, and we saw the mountain lake Ossiacher See for the first time. All illusions went quickly aside. We arrived in very cold weather. When Markus and Martin took our pontoon to the lake and cold wind caused our eyes to tear up, I was thinking about the world, mankind, catastrophes and our future. There was a snowstorm that had covered the mountains in white. Yes, it was the end of August, and I don’t know how abnormal this is for this region. Life is hard. Anyway, I had absolutely different ideas, just like my frozen girlfriend Gabriela. Markus anchored our pontoon by a dock at the mouth of the bay. It seemed to be good strategic place, even though I had no idea what waited under the surface. When the boys left, I started to think how I should start. The temperature of water was good. That gave me hope that carp would feed well. 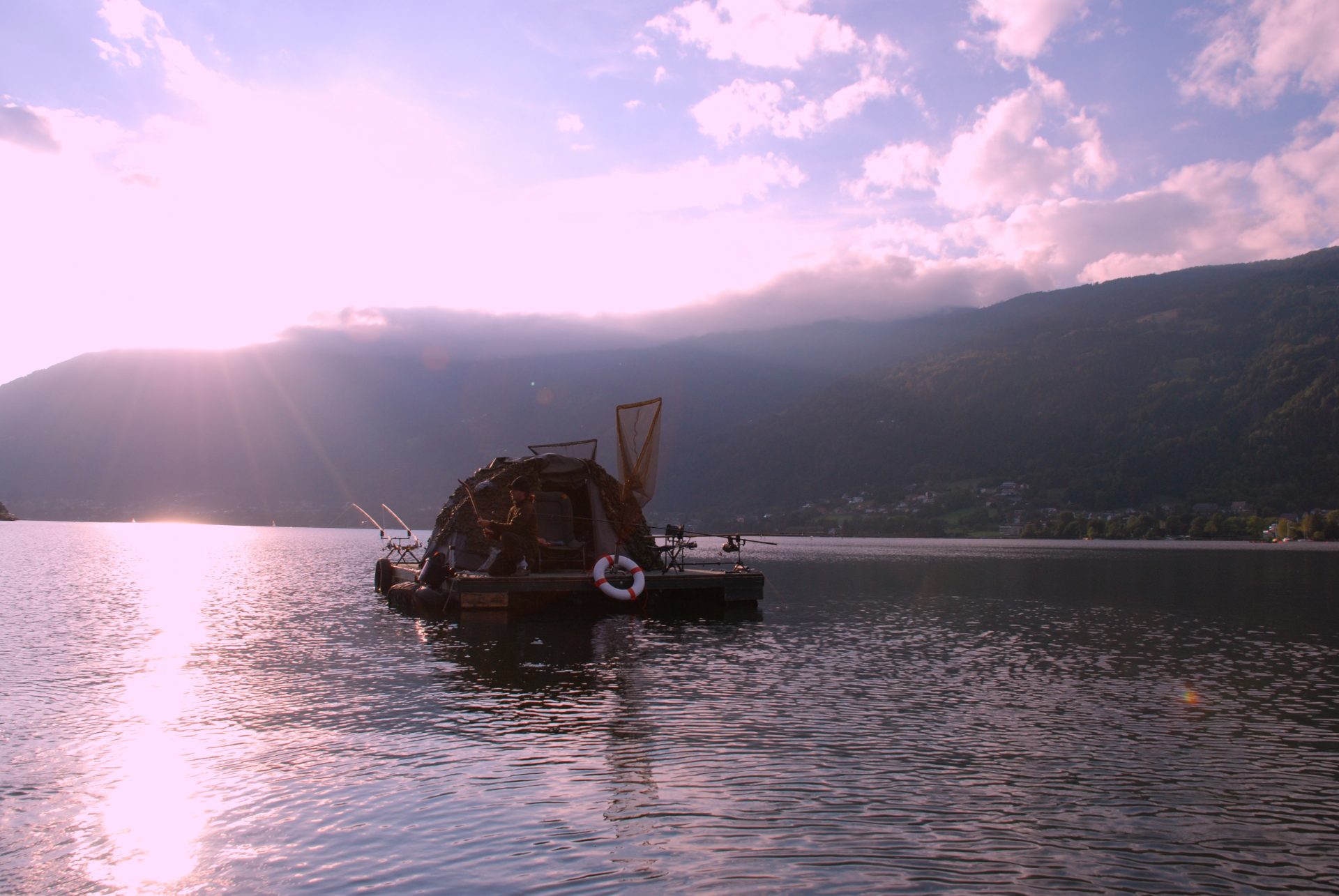 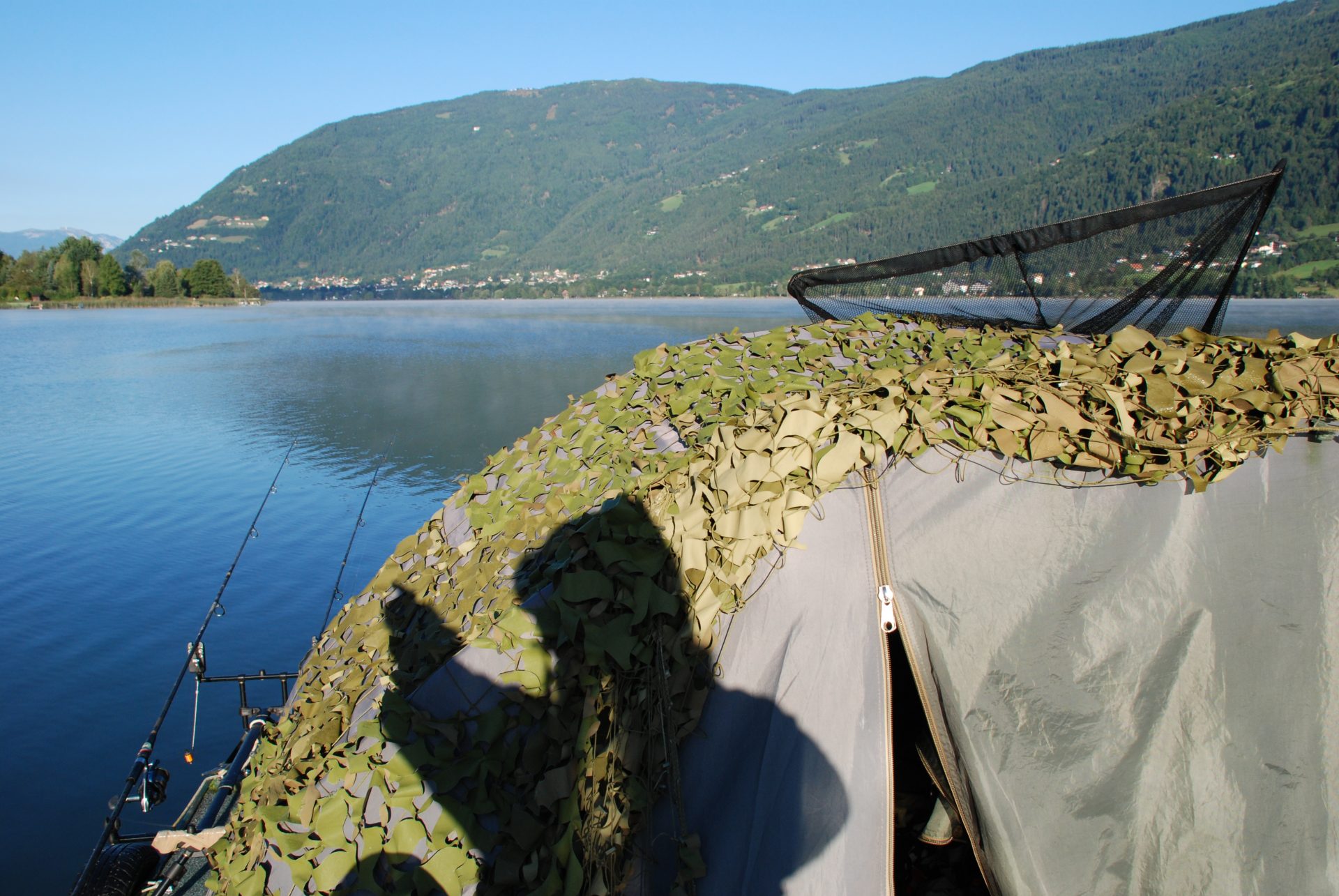 There was nothing to think about; I started as I usually do. First of all, I poured my baits over with liquid food All Amino Nutric, to get a strong food signal into the water. I baited two spots. In the first one, I baited up with 15 kg of Caviar/Fruits boilie. On the second spot I decided to spread approx. 0.5 kg of boilie with a throwing stick after each catch. I needed to understand the habits and behaviour of local fish and what kind of fish were there. And I was very surprised. There were approx. 20 catches at the place where I previously spread the food. But none of the fish was the one I came here for. There were catfish, bream, roach and trout. The second spot, the non baited one was without a take. A positive thing was that I learned to get the fish out from the fishing lines and anchored ropes. Drilling from the pontoon was a bit more difficult.

But I had to get used to it in case I caught a bigger carp. I was looking forward to the morning, to the sunset, when I would see the beautiful nature around me. It was really cold at night. The sun rose, but unfortunately we couldn’t enjoy it. We were trapped by the steam rising from the cold lake and forming a mist above us. I cast the rods randomly and kept catching only normal fish. The second day the mist was dispersed by wind, and we saw the lake in its full beauty. The first carp came with the beautiful weather and was caught on the Wild Strawberry boilie. It was from the place where I fed only with a throwing stick. It was a really “big” carp! It had almost 30 cm! Yes, it was a small fish, but it improved my mood. Honestly, it really made my day. Smaller catfish and other fish were finally replaced by my favourite fish: carp, the fish I am thinking of every single day. 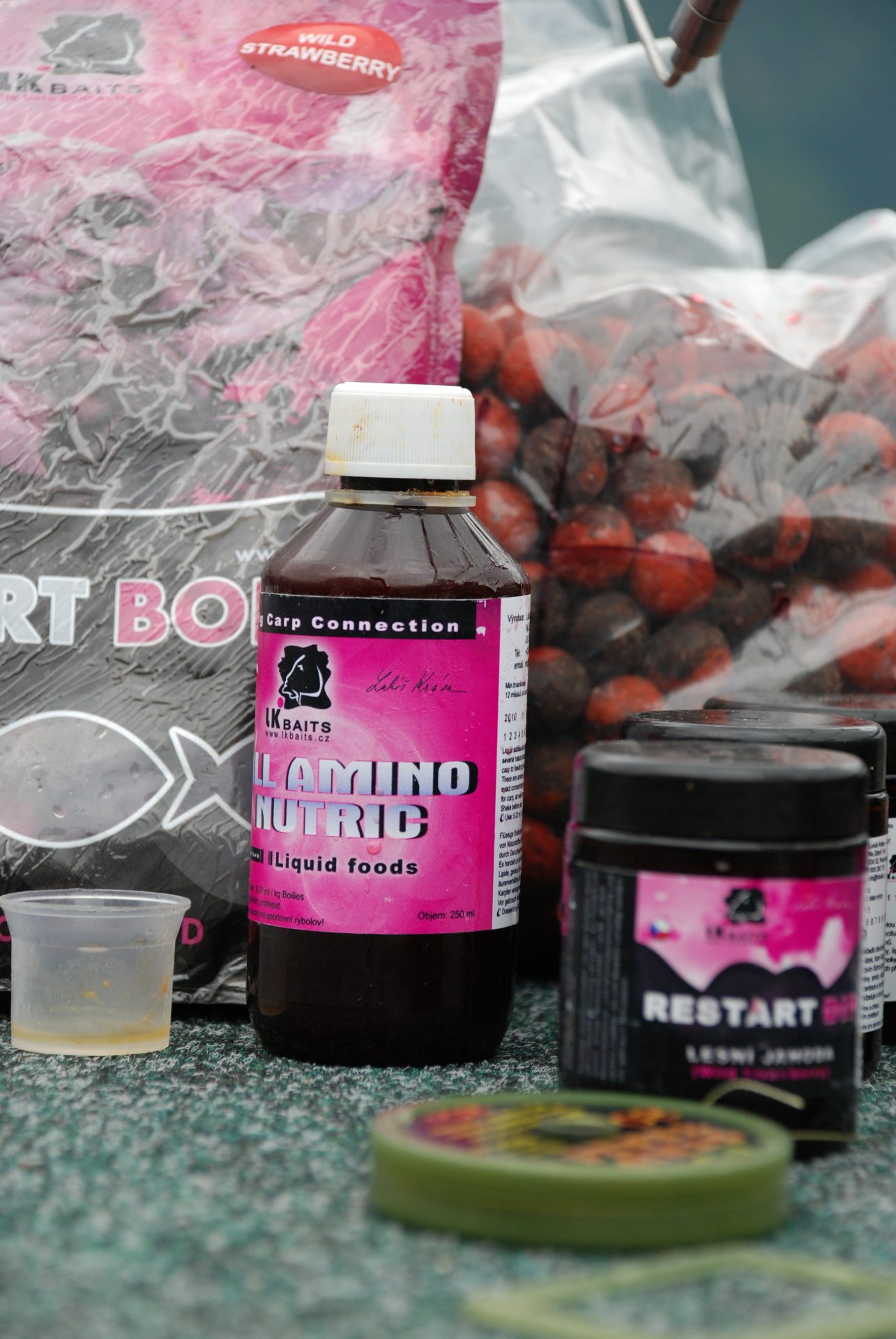 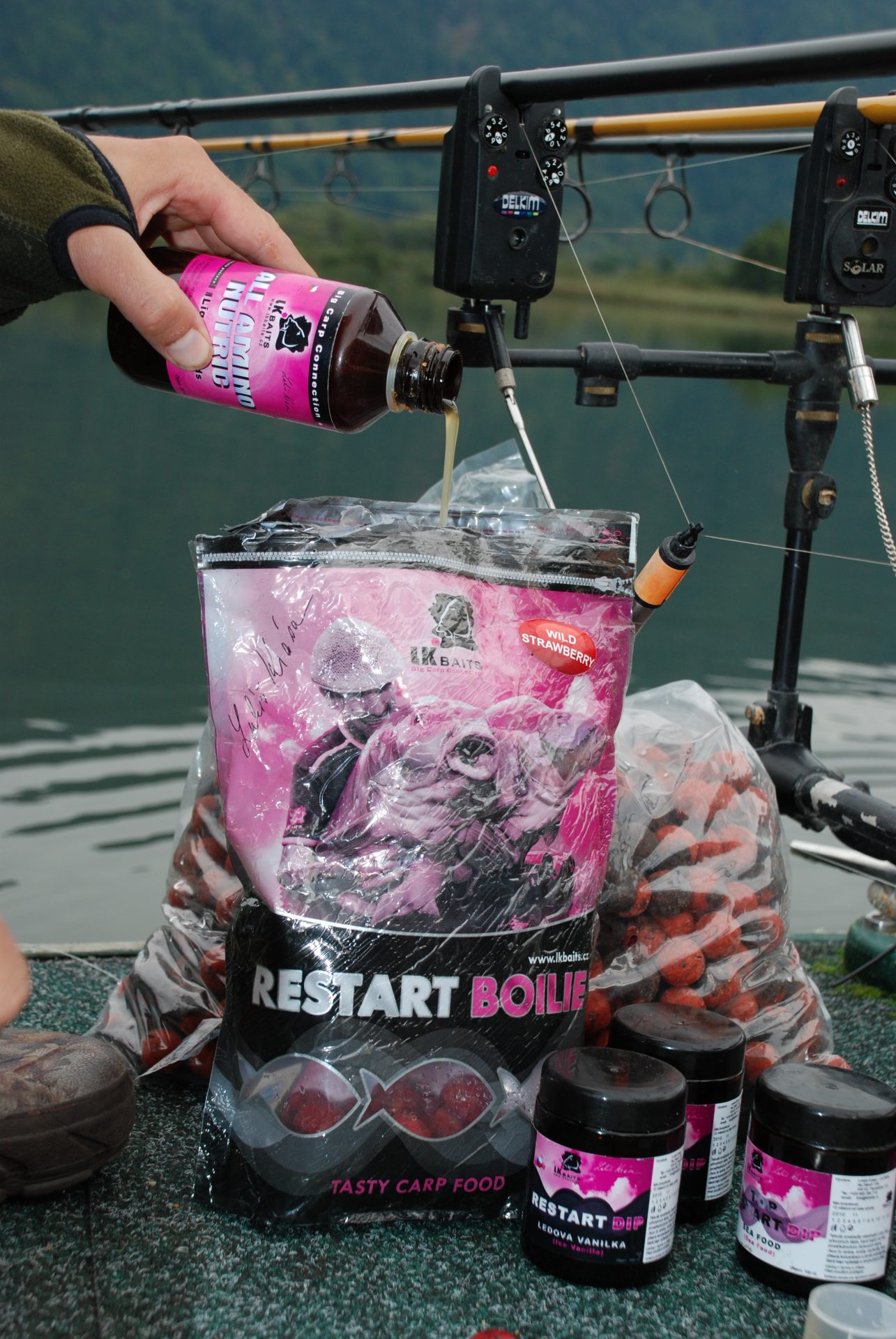 Even though the situation did not seem ideal, I hung on to my tactic. I spread approx. 10 kg of Caviar/Fruits boilie in the feeding area and left the second spot in peace. I hoped that the strong activity of the small fish at the feeding area would attract the attention of carp. It was about time. Two hours after feeding, just like when someone swings a magic wand, the unwanted fish were gone and I started to catch carp. Wow. Such a great feeling. They finally “answered my call”. I finally had something to build on. It was a chance to move further. I like when carp cooperate. They were about 40 – 70 cm. Not huge, but contact with them calmed me down. Until the third evening, I caught more than 20 carp from the feeding spot and one from the “non-feeding” spot. The difference was obvious. “It was about time,” I was saying to myself. I already had a tactic for the smaller fish. I was trying to work out how to get to those bigger ones and keep the spot attractive. I could do a lot from the pontoon as I could fish in all directions. That was ideal for my possibilities and another tactic that proved good in terms of big carp. 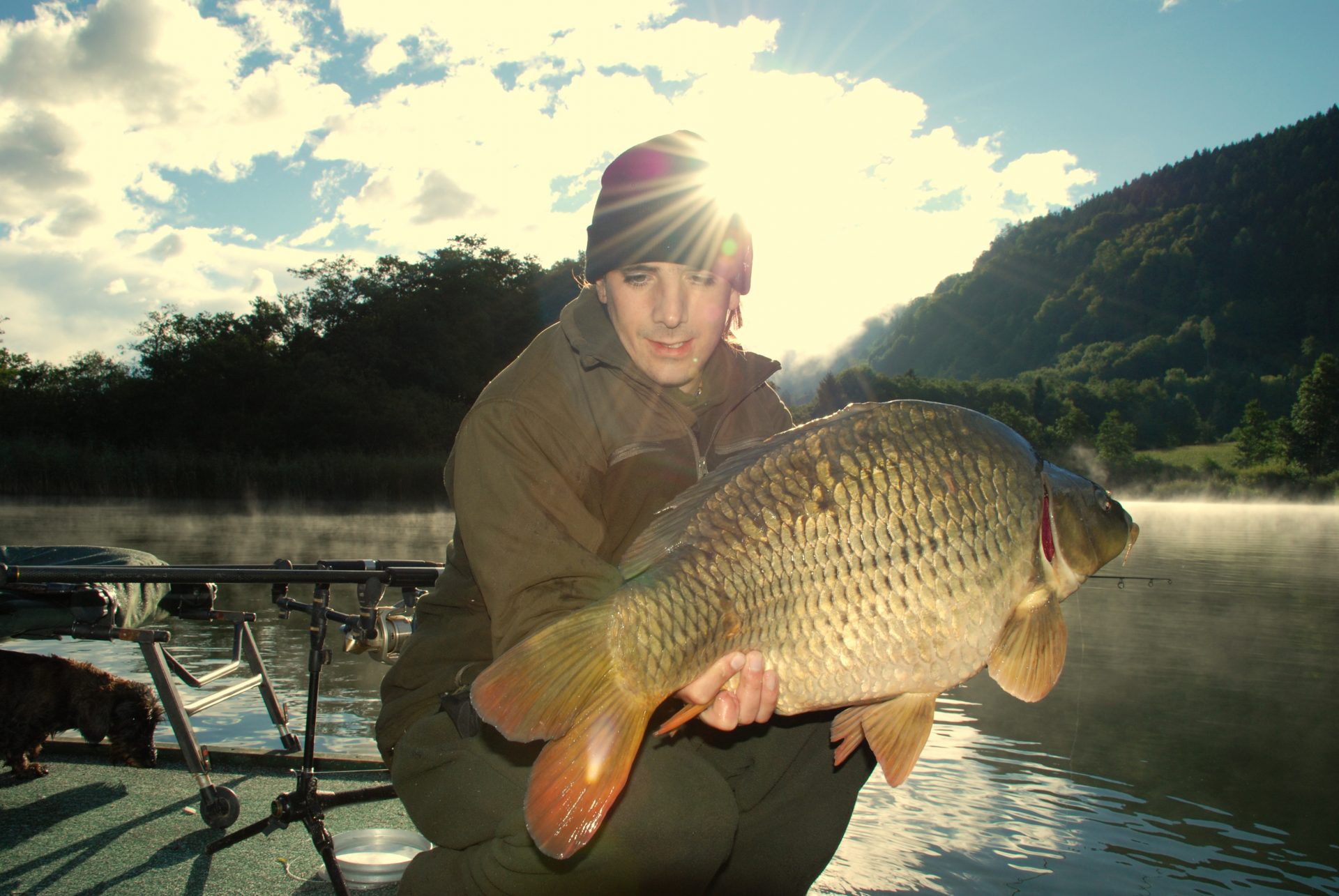 The tactics of “empty spot” was successful for me all over the Europe. Did you tried it?

I call it “leaving my places empty.” The place where I put a lot of bait from the beginning and where I got regular activity was cut out for it. It was time to start. On the fourth day, I stopped baiting and fishing there. In the meantime, I spread bait on the other place, approx. 100 meters far away. I wanted them to “eat up” the first spot and then to go away or to the new feeding spot. Who knew if my ideas were right. If so, then at least partially. Trophy carp that live in small groups or alone don’t like much excitement. On the other hand, they are often close to places with food, and they are aware of the food. That is my experience. The new feeding spot was working well not even in one day and I saw new types of fish. After some time, I tried to put attractive bait to the original and now an “empty” spot to find out whether the small “piranhas” are still there. In these cases, I use the most attractive Fluoro Pop-Up Compot NHDC. Within 30 minutes, I caught a smaller carp. The place didn’t seem empty yet, thus not suitable yet for my intention. However, it didn’t take long, and this attractive bait laid in the water a longer time without notice. Therefore, I tried one single hookbait of the Sea Food boilie. That was my tactic. 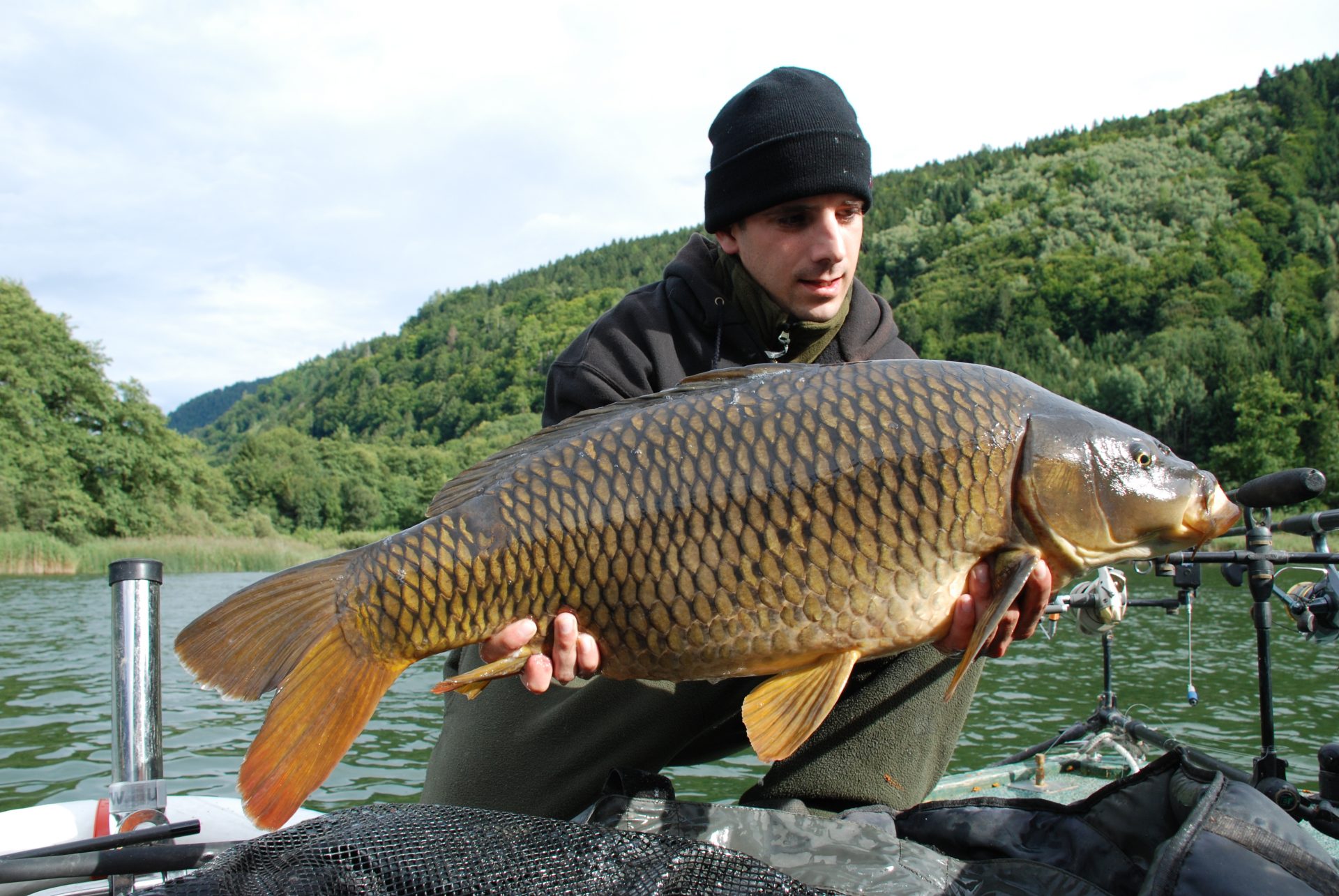 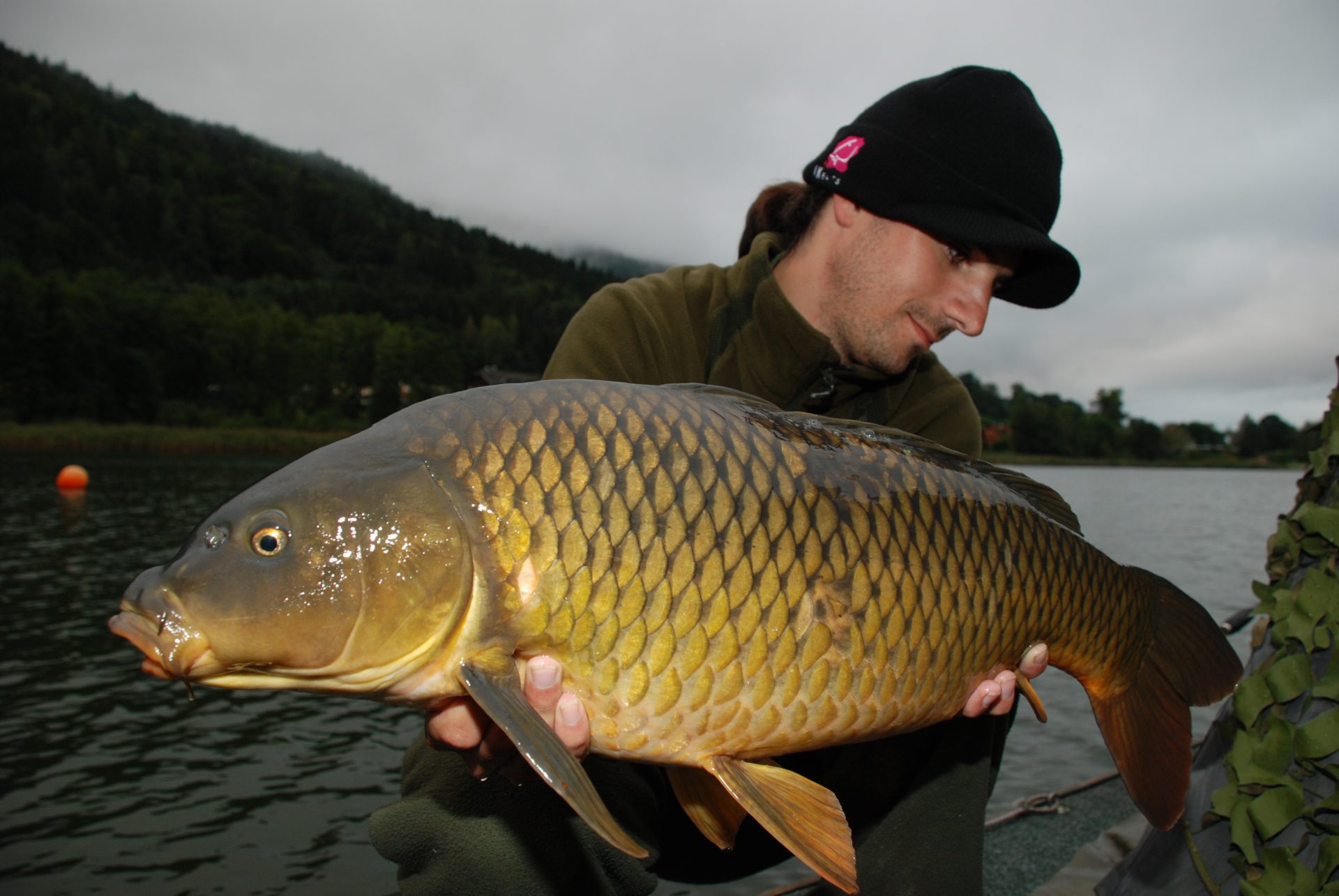 I was catching 5 – 10 kg carp in the new feeding spot and the old “empty” spot was calm – until the next morning, when it came. It was slow. The reel turned very slowly. Usually, I cannot determine the size of a fish in this situation, but now I was sure there was something on the other side that I hadn’t seen here before. The carp went around the pontoon in circles and stayed at the bottom. I left him. I wanted him to get tired at a sufficient distance from the pontoon for a simple reason: the water under us was 5 meters deep, and there were several ropes and fishing rods. But my plan didn’t work. The carp swam in our direction and directly under the pontoon. It was time to get him out. How should I have known if I could pull more or not? When would it snap off? It was terrible. The carp felt safe under us, and so I maneuverer the rod under the anchorage ropes. I somehow managed it, but when I saw the carp’s body, I got nervous. I had the same feeling as when I caught my first carp. It happens sometimes, and I wished it were over and that I could raise the landing net with a tired carp. I really didn’t expect such a fish. It was it. A huge, black carp. Exactly the one I had imagined finding in a mountain lake. I don’t know how long we fought over the last meters of the line, but one thing was for sure: I won! I landed the carp and left it in the net. Gabina took care for it. For those moments, I had a second rod prepared. I casted it in the “empty” spot straight away. This paid off many times. I hoped the carp wasn’t there alone and hadn’t frightened its friends.

“It might be OK; the water is about 5 meters deep,” I thought. I set the alarm and went to see my capture. Hook size No. 8 looked quite funny in the carp’s mouth. But he sat there quietly. A huge, black carp: what a beauty. We were all happy, even our dog Miky; she was running around the carp happily. As we prepared to take some pictures, the swinger on the other rod signalled another take. I placed the carp in the sack and lowered it from the pontoon. I run to the other rod and I was in! Wow…it was there! The rod bent, the fish went slowly into the deep water, and we started laughing. I enjoyed the second fight in absolute ease. I knew there was one huge beast waiting for me under the pontoon. And it could have been even better now. But as the fight went on and on, I started to feel uncertain. My heart was beating and my knees were shaking. I didn’t want to lose it. Not even the previous experience of coping with a similar fish removed the adrenaline, the trembling, the restlessness and excitement. At that moment, I experienced two “fights of my life” after each other, and I also wanted to win the second one. I didn’t want to lose that feeling of directing the carp into the landing net, placing it on the mat and looking at it eye to eye. Each carp has its individual expression, is differently aggressive, and each one tries to gain back its freedom. They are similar, but also very different. And I won again! 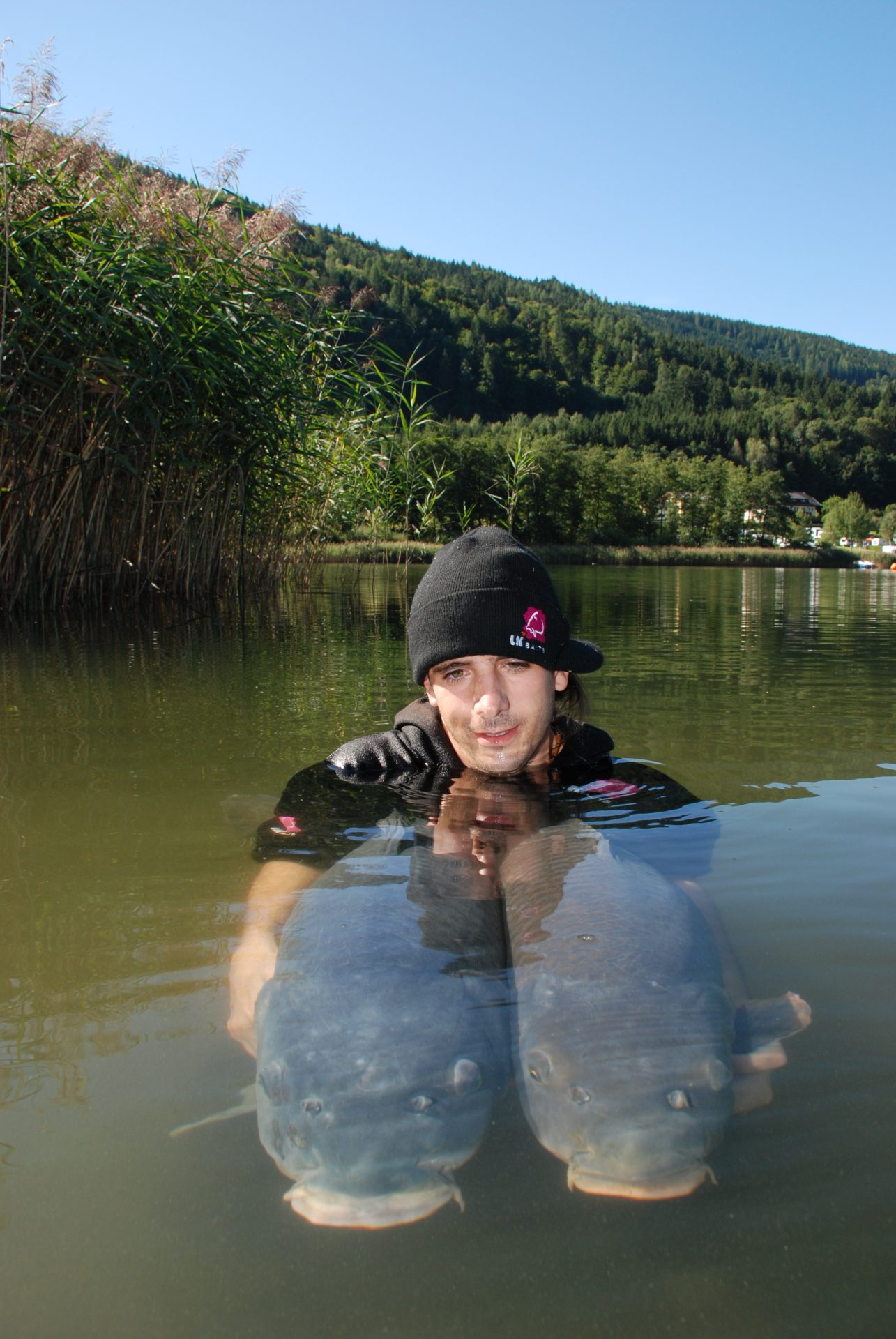 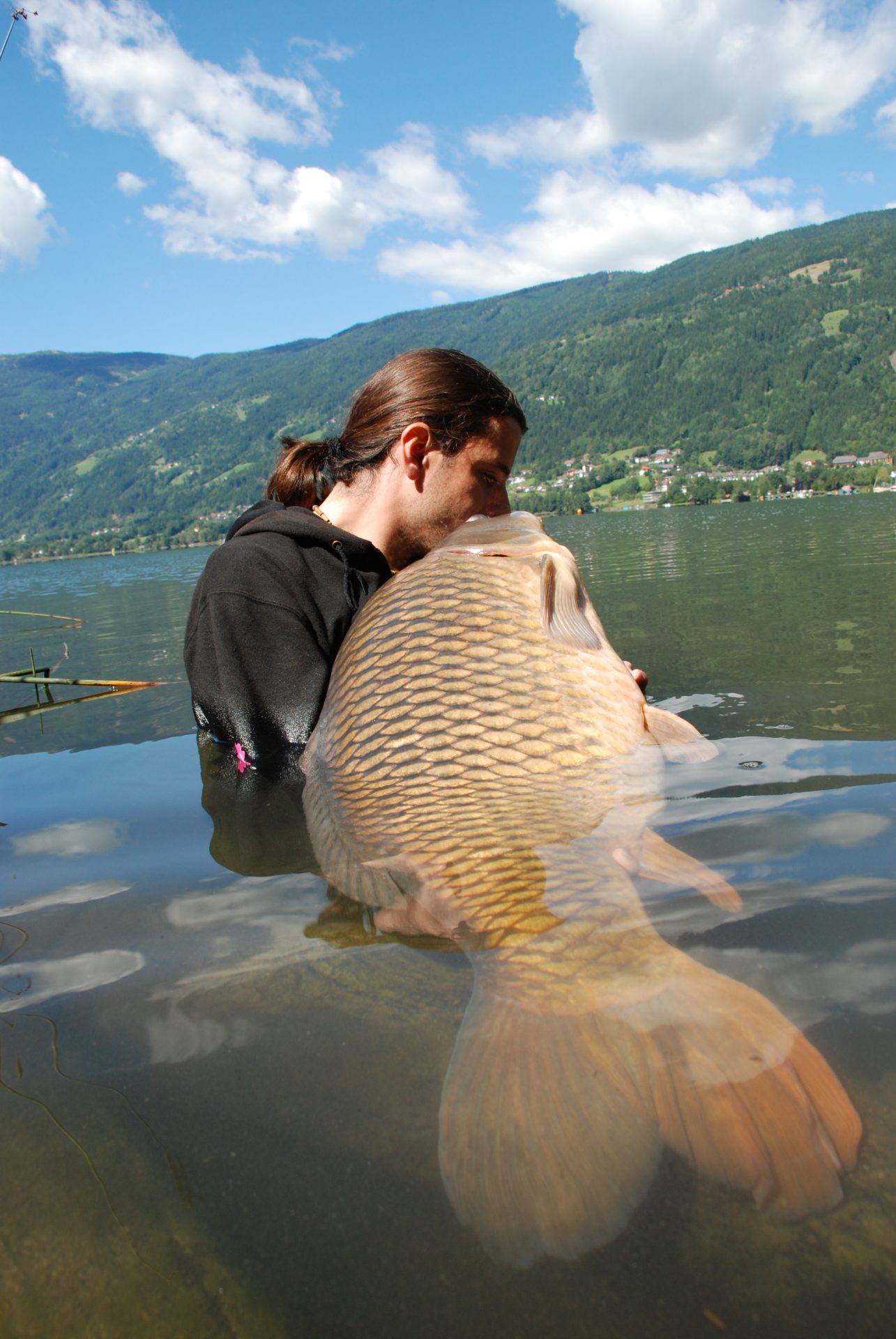 Each carp has its individual expression, is differently aggressive, and each one tries to gain back its freedom. They are similar, but also very different. 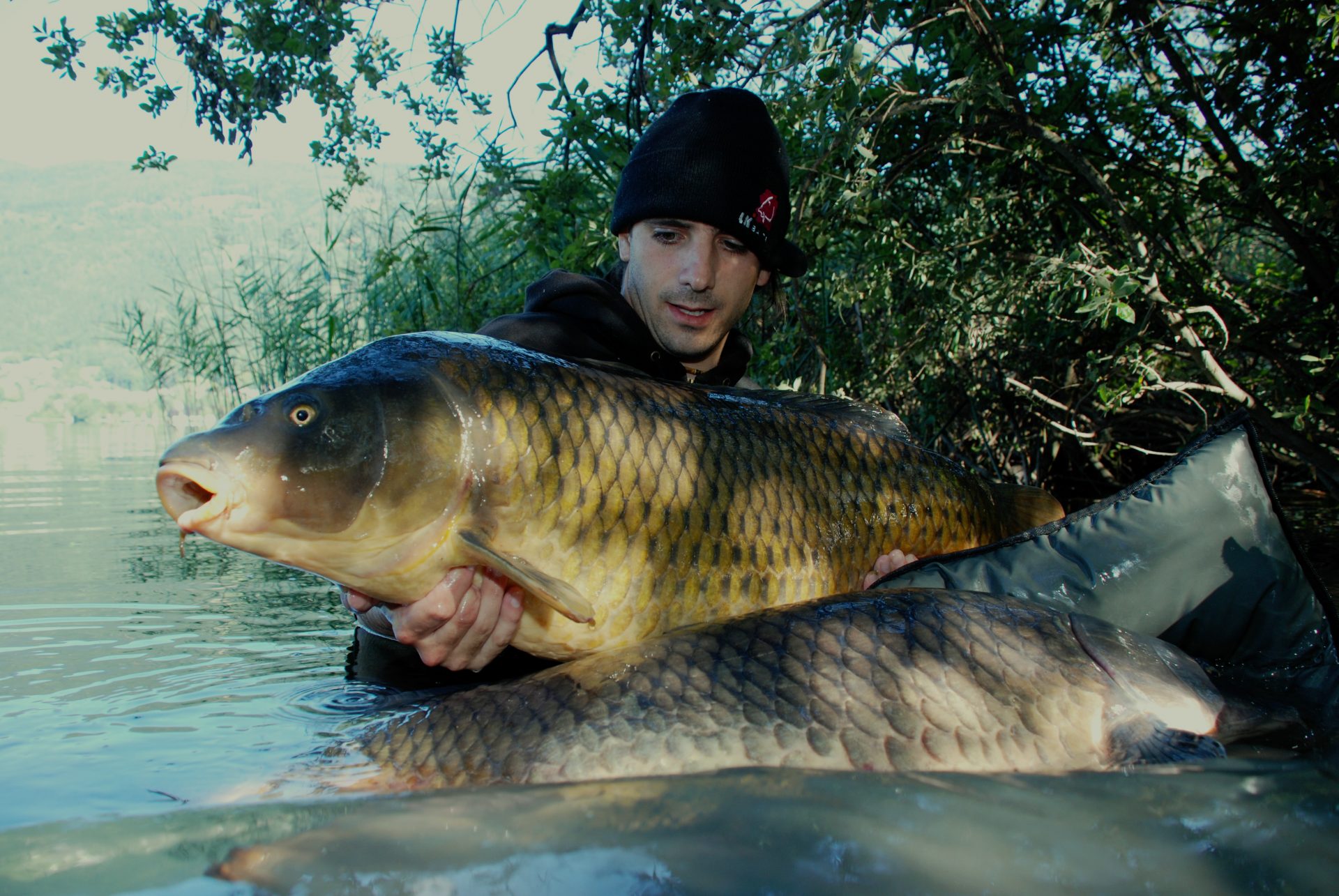 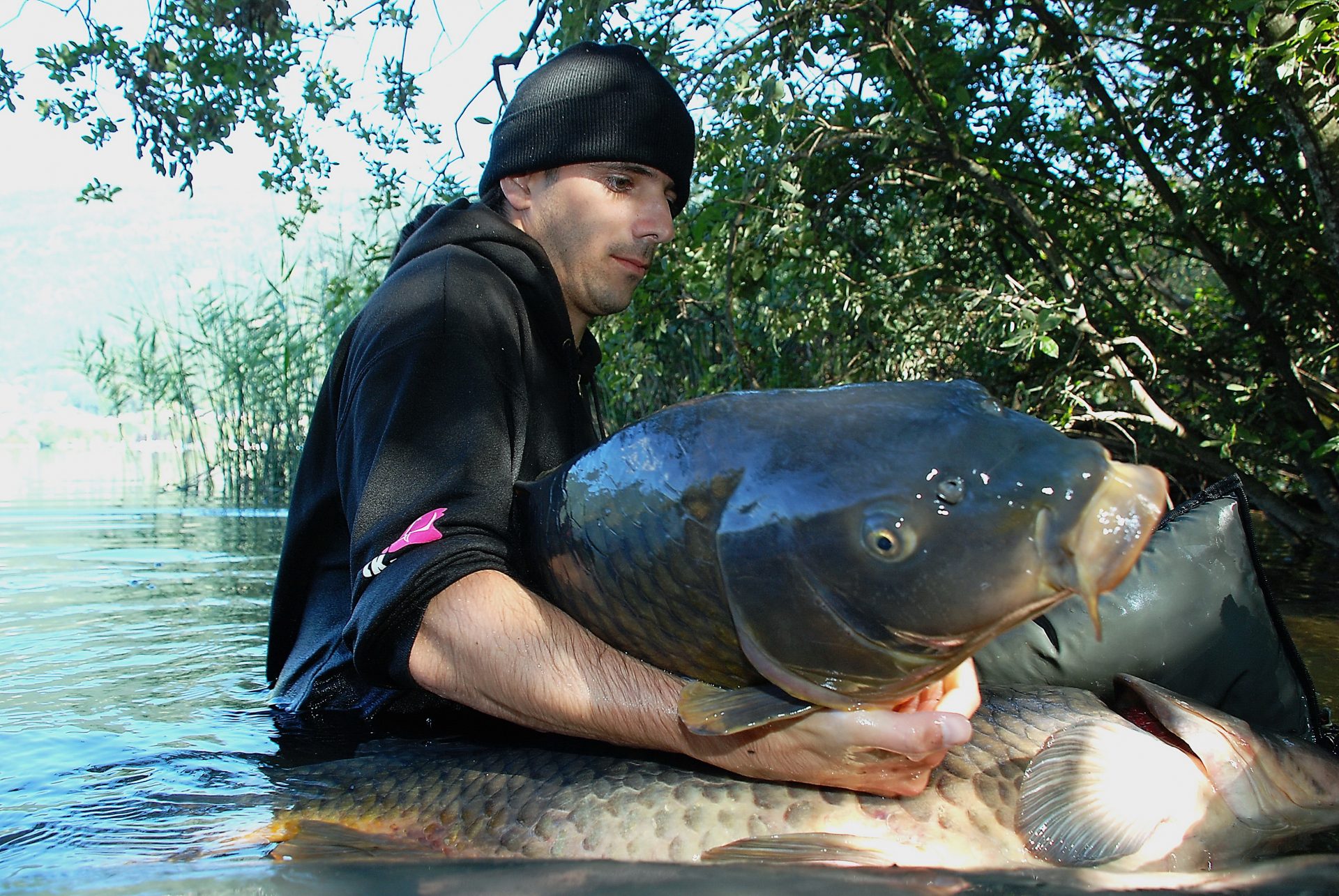 We were resting after the fight…. the carp and I. I was thinking about what must go through their heads. Do they realize what happened? When I saw those two giants lying on the mat, I was happy. Those cold nights, convincing Gabina, wet clothes and getting Miky out the lake paid off.

It might seem that everything repeats; but for me, it is always a new story. Even when the main heroes are identical. Every year, I travel to different waters and try to overcome new and new challenges, think of new tactics, getting used to different water biotopes and outwitting them. 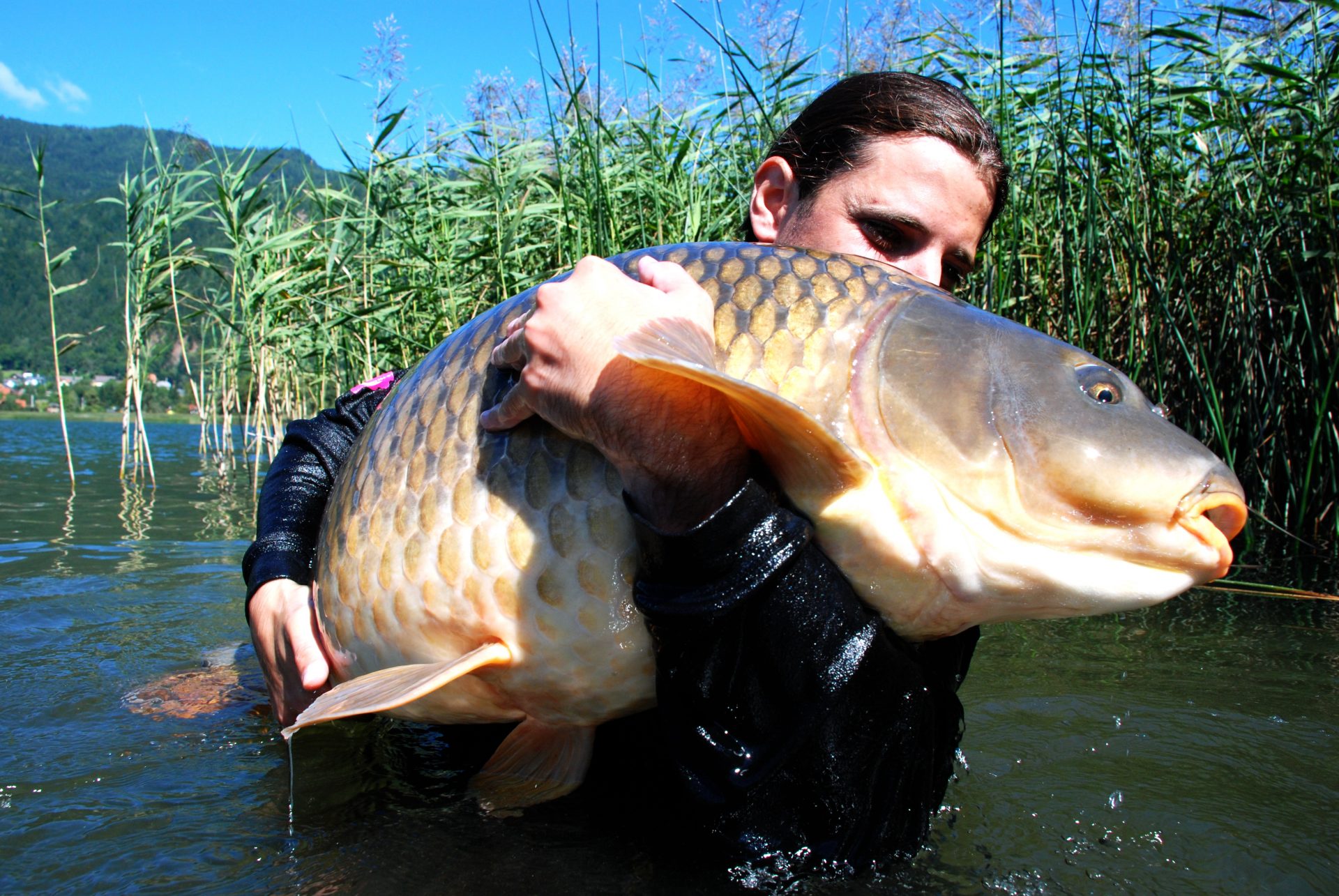 This massive and strong fish can’t be forgotten. We were together with my wife few days in the middle of the big lake Osiacher See and we were thinking about local fish legends, not knowing that one of the biggest will land in our net. It was it! At those date, the biggest known carp in the lake.